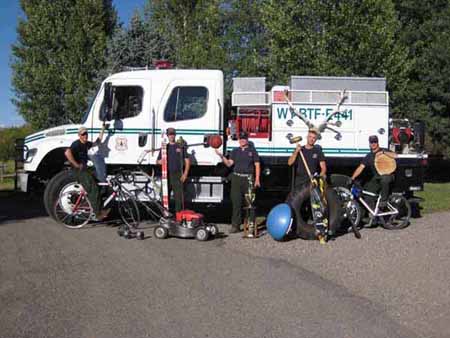 Resources on the North Zone of the Bridger-Teton National Forest assist with initial attack on Teton County lands and within Grand Teton National Park as needed. The total land mass is about 1.5 million acres, and has a complex wildland urban interface environment, as well as some of the most remote areas of the lower 48 United States. North Zone firefighters are actively involved in full suppression, long term management of fires and prescribed fire operations, as well as actively implementing mechanical fuels reduction projects. On the north zone of the B-T one can expect to work within a diverse fire management organization which places high expectations on individual and crew performance, and provides some unique Fire Management experience opportunities.

Engine 441 is a Type Four Interagency Wildland Fire Engine staffed by a 5 person module, based out of the Jackson Ranger District, with the primary response area of the North Zone of the Bridger Teton National Forest. The crew responds to initial attack fires, supports large project fires and prescribed fires while providing opportunities for crewmembers to gain experience on crew assignments.

A class B commercial drivers license is needed to drive the engine, but not necessary for a crewmember position. Season starts around Memorial Day and continues through the end of prescribed fire season, somewhere in the end of October.

Mission Statement: E-441 will strive to exceed the standards and expectations of wildland firefighting by demonstrating teamwork, respect, commitment, professionalism and safety.

The ability to hike with 85 lbs over 3 miles in 90 minutes. Hike Snowking Mountain, the town ski hill with 1571 vertical feet of switchbacks, within a seasonal goal of under 30 minutes.

The Bridger-Teton National Forest lies on the southern edge of the Greater Yellowstone Ecosystem (GYE). The GYE encompasses the largest intact temperate ecosystem in the United States. Lands are managed by multiple agencies and landowners including the National Park Service, US Forest Service, Bureau of Land Management, US Fish & Wildlife Service, the states of Wyoming, Idaho, and Montana and numerous private landowners. Scenery, wildlife and remote wilderness recreational opportunities abound.

The Bridger-Teton, at 3,400,000 acres is the second largest National Forest in the United States outside Alaska. It is noted for its unusual scenery and natural features, large and diverse wildlife populations, and habitat for threatened and endangered species. The Forest contains the headwaters of 4 major river basins: the Yellowstone (Missouri/Mississippi Basin); Snake (Columbia); Green (Colorado); and the Bear River (Great Basin). Seven major mountain ranges are found within the Forest Boundaries. These mountain ranges are part of the northern Rocky Mountains and include parts of the striking Teton Range and Wind River Mountains.

The Town of Jackson The Town of Jackson is the county seat of Teton County and the only incorporated municipality in the county. “Jackson Hole" as it's often called, refers to the whole area which is a 50 mile long valley surrounded by high mountains. Jackson is a popular tourist destination because of its proximity to Yellowstone & Grand Teton National Parks, its unmatched scenic beauty, its world-class skiing, and its western character. For tourism information, including listing of lodging, restaurants, and shopping, please contact the Jackson Hole Chamber of Commerce at 307-733-3316 or on the web at www.jacksonholechamber.com. This spectacular valley in the mountains offers residents and visitors alike an unparalleled array of outdoor activities for year-round enjoyment. From world-class skiing, snowmobiling, backcountry touring and dog sledding in the winter to hiking, rafting, fly fishing, paragliding, mountain biking and rock climbing in the summer.

In addition to the incredible scenery and unlimited recreational opportunities, Jackson is also known for its genuine western charm, as the fifth nationally recognized arts center in the nation, and for quality events such as Old West Days and Fall Arts Festival. Once primarily a community comprised of ranchers, Jackson’s residents now pursue careers in a broad range of industries from ranching to hospitality and tourism, construction, professional services and technology. The highly diverse community, seasonal residents and vacation homeowners, add to the special feel of this small western town. Due to the abundance of public lands and the conservation efforts to protect open space, the Town of Jackson has a very limited amount of land for development. Many individuals commute from areas such as Victor and Driggs, Idaho, and Pinedale, Alpine and Dubois, Wyoming. Although Jackson Hole has undergone change since homestead settlement in the 1880’s, the reasons people come to the area remain the same. The old West feeling of small town hospitality, the people, scenery and recreational activities continue to attract people from all over the country and world.