The Cow Creek fire was reported to Teton Interagency Dispatch on Thursday, August 6.  The fire is 8 acres and is believed to be a "holdover" from lightning several days earlier.  Two Teton Helitack  and 11 Smokejumpers  have been assigned the fire.

Lightning caused fire, called out on 7/27 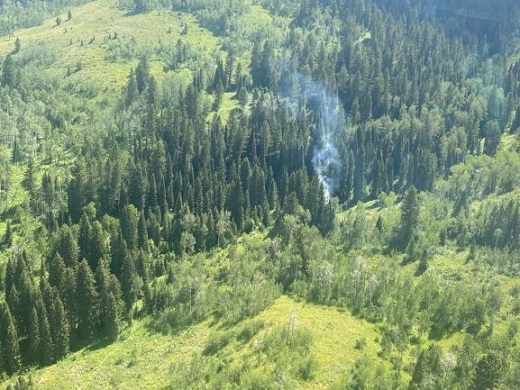 The cause of the fire was due to lightning from a storm that went over Thursday and held over until Friday late afternoon. Hunters in the area of Pine Knoll saw a tree torching and called it in to local authorities. Fire personnel are taking full suppression action at this time. 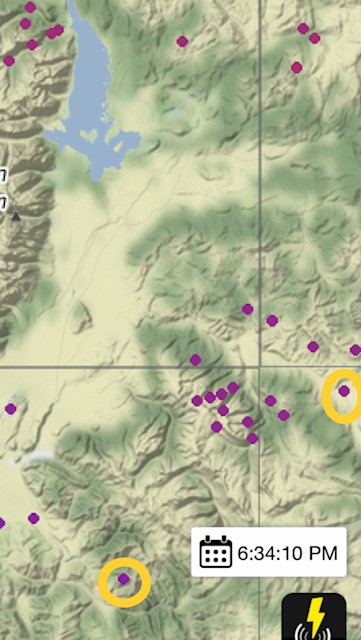 This is a new fire start from the lightning storm passing over the Teton area on 8/28, detected on Saturday by a homeowner living in the Munger Mountain area. This small fire .10 acre is smoldering in heavy timber and has moderate potential for growth. Due to the proximity of the fire and the wildland urban interface, this fire is being fully suppressed.

Several lightning strikes have been documented from the storms passing through the Teton fire area on 8/29. The Grey Hills fire is one of those strikes which had enough receptive vegetation at the base of the tree to smolder half a day before being detected by an ATV tour group riding in the area.

Smoke was reported 1/3 mile north of the AMK Research Station on the early evening of August 15, shortly after a thunderstorm had passed through the area. An engine crew responded on foot and located a lightning-ignited fire, smoldering in surface fuels on a slope to the east of Jackson Lake, on Sargents Point. The fire was suppressed on August 16 and controlled that evening at 0.1 acres.  A squad re-visited the fire on Sunday August 18th and determined that the fire was OUT.

The Flat Creek fire was the result from a lightning storm passing over the Gros Venture Wilderness area in early August of this year. The fire never showed much growth or smoke. The fire experienced several high wind events and yet held tight and in place with only two days of visible smoke. Fire managers appreciated the collaboration with the local ranch and outfitters for their support in planning and preparedness.

09/12 - This fire was declared out after receiving a significant amount of snow.

08/26 - Wilderness Rangers have been periodically checking on this fire. The fire is still smoldering and creeping in the duff. Low potential for spreading. Photos from 8/20; photo 1, photo 2

Lightning passing over the Gros Ventre Wilderness area on 7/29 ignited this small 10th of an acre wildfire. The fire is under a full suppression action with the aid of four West Yellowstone Smokejumpers. During the fire's size up the jump plane reported low fire behavior, smoldering in a small stand of timber with minimal growth potential.