10/11-  Satellite fire detection and heat monitoring apparatus have not picked up any activity in the area or with the fire's perimeter for over a week. Weather over the fire area has produced a mixture of rain and snow, limiting any new growth or activity on the Yellow Mountain Fire.

10/5- No new reports for this fire as the cooler and moist weather has reduced the fires activity. Managers will continue to actively manage the fire until the fire is out.

9/30 - Two firefighters were flown to the fire area yesterday morning, Saturday, September 29. They contacted guides and hunters at an outfitter camp north of the fire, gave weather and fire-behavior reports to dispatch and fire managers, and provided point protection (see description of a point-protection strategy below) to the outfitter camp. The camp is supporting the firefighters logistically by providing a safe place to sleep in bear country.

The fire was not nearly as active Saturday as it was Friday. Fire behavior consisted of some single- and group-tree torching but no running crown fire. The northern perimeter did not significantly change, and the fire remains south of Valley Fork and, therefore, Bruin Creek, which is further north. Most of the growth was easterly.

Today's noon report from the field was that the active edge of the fire (the east side) is burning downslope into the Valley Fork drainage. Within the perimeter, isolated pockets of trees are occasionally torching. Cloud cover is 90 percent, which is having a moderating effect on fire behavior.

The two firefighters will remain on scene for at least one more night. Fire managers are tracking the weather and prepared to fly them out either at end of shift Monday or on Tuesday morning should Tuesday's rain/snow event appear likely. 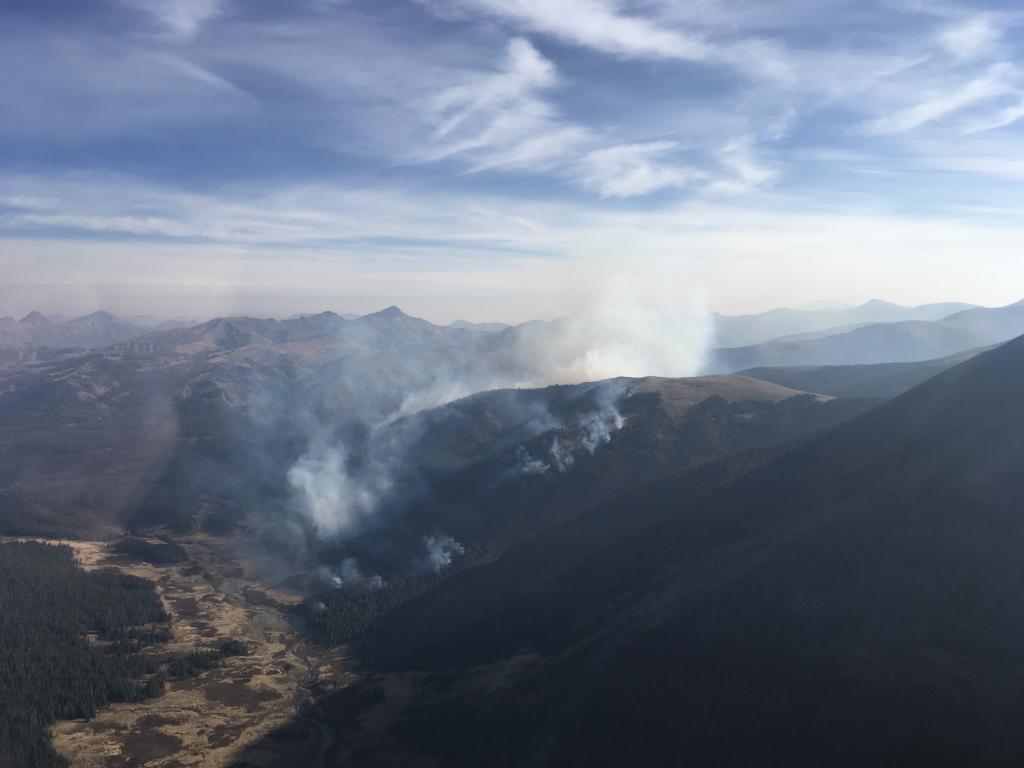 9/29 - On Friday, September 28, fire activity increased in response to hot, dry weather that has been established across western Wyoming for the past several days. During the past eighteen days, the 13-acre fire had been moderately active in mature lodgepole pine at the base of a west-facing timbered slope of Yellow Mountain. on Friday afternoon, the fire made an uphill run, spotted over the adjacent ridgetop, and became established on the east-facing slope. It is now estimated to be 516 acres. The fire remains south of the confluence of Valley Fork and Bruin Creek and east of the Thorofare River and Thorofare Trail. Smoke was visible from as far away as Cody, Wyoming, Friday. Fire activity could increase again Saturday afternoon, resulting in another highly visible smoke column. Two firefighters are on scene, providing information to hunters and the closest outfitter, relaying fire-behavior and local weather information to fire management specialists, and implementing a point-protection strategy of the outfitter camp near the Woody Creek and Thorofare River confluence.

Fire managers have determined that a point-protection strategy is best for this lightning-caused wildfire. With a point-protection response strategy, firefighters protect specific assets or highly valued resources from the wildfire without directly halting the overall spread of the wildfire. Fire managers consider exposure to firefighters, the values that are at risk, and in the case of the Yellow Mountain Fire, the impacts to recreationists and Teton Wilderness values. The point-protection strategy was identified as the best balance to support wildlife-habitat enhancement and wilderness values per Bridger-Teton National Forest Plan and National Wilderness Act of 1964. 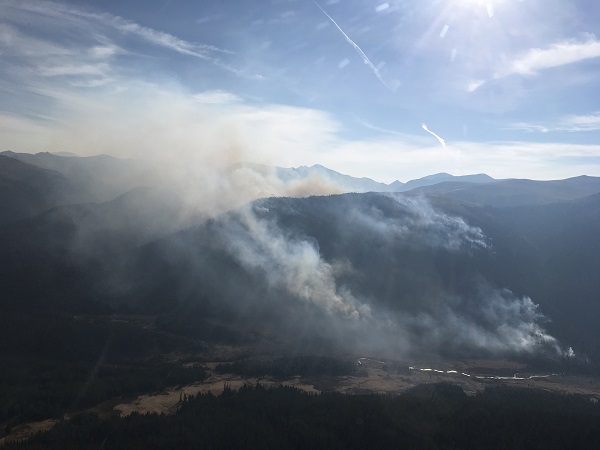 9/27 - The fire is currently approximately 13 acres. Fire managers flew over the fire Tuesday, September 25, and observed some smoke a little flame in ground vegetation on the fire’s minimally active northern perimeter.

9/10 - The Yellow Mountain Fire is located deep within the Teton Wilderness Area of the Blackrock Ranger District. The fire has moderate spread potential as it slowly burns within a large stand of lodgepole pine mixed with dead timber above 9000 feet.

The fire was caused by lightning, and interagency fire managers will be managing and monitoring the fire per Bridger Teton National Forest Plan and National Wilderness Act of 1964 direction. Fire history has not been recorded in this drainage for over 80 years and this fire will help add to the age diversity of trees in the area. Allowing fire to consume the dead and down trees will help to recycle some of the area’s dead vegetation, return nutrients to the soil and open the forest floor for new growth, helping to enhance wildlife habitat for many different animals living in the area.

The fire is east of Thorofare Trail #6059, and there are no trail or area closures.  However, visitors in the area should use caution and stay alert as wind and dry weather can help contribute to active fire behavior, such as torching trees and spot fires.